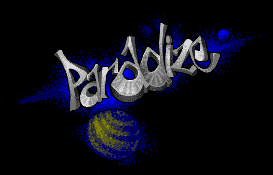 Cooper finished another puzzle game for the Atari Falcon 030. It was already released at Sillyventure 2k11

See Pouet at http://pouet.net/prod.php?which=58102 or our Games section for download

Simon Sunnyboy finished a little helper routine to draw tiles onto an ST-LOW screen from AHCC.

The routine draws either 16, 32, 48 or 64 pixel wide tiles in all 4 planes with any amount of scanlines on an ST-LOW screen.

The x coordinate is cropped to 16pixel increments for speed.

It was a small but great and very friendly event with an ace catering! :)

Check the photos at SSB's blog

Simon Sunnyboy learned abit how to use LINEA on a low level. The result is a small routine to provide an RC_COPY equivalent for AHCC.

The routine can be adapted to Pure C using the Pure C native LINEA API with small rewrites. Same functionality as GFABASIC RC_COPY but now for C. (ST-LOW only due to hardcoded values)

Time for another small code release. Simon Sunnyboy finished his rasterbar sources for AHCC and you can download them in the AHCC section.

The package should be compatible with Pure C if you tweak the project file. You basically have to add the files ssb_rast.s and ssb_rast.h files to your project.

Whew, what a long time since the last update!

Cooper released his latest Atari ST puzzle game called Kolmik (Deluxe Edition) on Christmas 2010. It has been on DHS for some time but I (SSB) didn't update our webpage.

Grab the game at the Games page and don't forget to vote on Pouet!

Simon Sunnyboy added his STLOW access library for AHCC to the AHCC page.

You can now easily switch to ST-LOW or ST-MEDIUM from your C code. Just link the new library and use its calls.

Starting with today Paradize officially supports C coders on the Atari ST. Simon Sunnyboy plans to move to C in the upcoming time. In this process a lot of libraries and helpful C code will emerge.

You will find those libs and stuffs on the AHCC Support page. AHCC is a free and Pure C compatible compiler that is still developed and supported so go grab the AHCC Compiler package and enjoy!

For the start we have a small library for accessing the IKBD, e.q. reading keyboard, mouse and joystick without the help of TOS. Support libs for switching to ST-LOW, Falcon TrueColor, Jagpad access, DMA Sound and replaying SNDH music will soon follow (hopefully before Outline 2010)

Paradize welcomes a new member aboard. Malodix joined our ranks as an additional graphics and music man.

Thanks to Zorro 2 / NoExtra for supplying this some time ago!

Paradize has a new game release for your Atari ST/STE/TT and Falcon out.

A preview version has been shown at Outline 2009 but this is the final game with digi sound and sprite animation.

Attackwave is a simple shooting game in the wake of Missile Command and Galaxians. Just blast the baddies from your orbital laser sat for highscore. 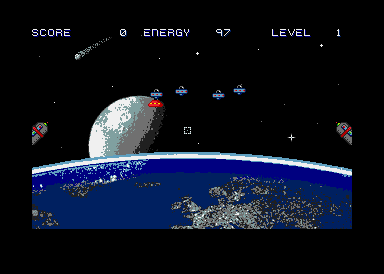 Grab it over at the Games page.

There is a saying that competition is good for business!

True to this word, Heavy Stylus/RGCD und Tomchi/NoExtra released a new game for the Atari STE. 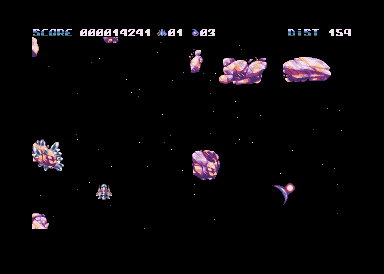 r0x is an avoid'em up in space for up to 2 players for all STE with 2MB RAM or more.

Well done, RGCD! - time for us Paradizers to finish something, but no worries, there are more games from us in the works so stay tuned!

Not directly Paradize or ST related but our crewmember Orion released a nice collection of his work on the Atari Jaguar console as a CD image.

A new utility has been released.

Grab the Paradize Rasterbar Generator at the Tools section

A Happy New Year 2009 to all of you! Paradize begins the new year with releasing another puzzle game for the Falcon. 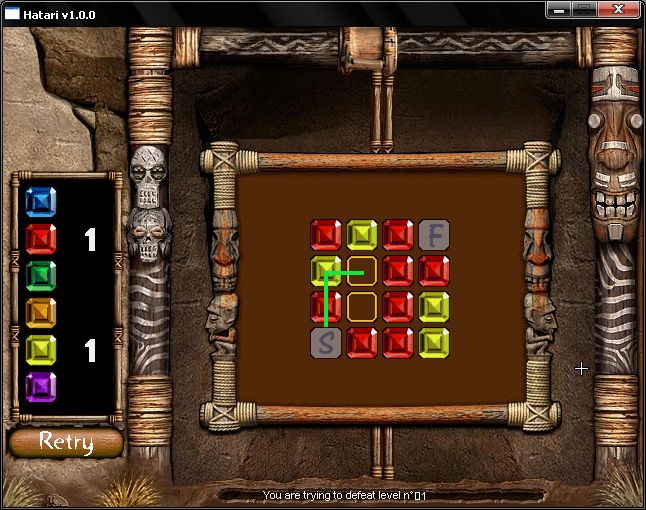 Grab Jewelz for your Falcon over at the Games page.

Simon Sunnyboy's opinion: Now we should call ourselves "Puzzledize" instead, shouldn't we? 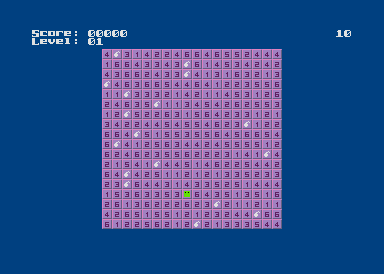 Grab it over at the Games page. Two binaries are included, one for ST use and one for Falcon.

As we Paradizers will probably not update any news before Christmas, we all want to wish you a Merry Christmas 2008 and hopefully a succesfull year 2009 on Atari!

Another Falcon release for you to enjoy: Cooper finished his first game for the Falcon. 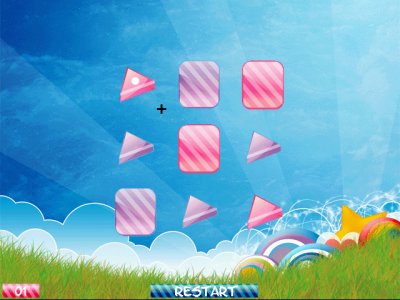 Grab Chainz for your Falcon over at the Games page.

Paradize is proud to present Zikdisk #2, a massive YM music album with groovy tunes by Marcer

Grab it over at the Demos subsection.

Time for a change! We have a new website logo as you can see above. It has been designed by Ukko / Sector One last year.

Thanks for supporting us!

Today Paradize releases a special goody for all the GFABASIC lovers out there. Simon Sunnyboy's Rasters for GFABASIC install a Timer B handler to have support for rasterbars in GFABASIC. The routine rasters a color register of your choice (0 by default) with a list of colors the programmer can specify and alter on the fly. The width of the raster bars can be controlled as well.
A raster stabilizer is fully included in the raster handler but a seperate version of the stabilizer for use in your own raster routines can be downlaoded as well.

Cooper has updated "The pairs are gone".
You can now select between sample and YM music by pressing m.

Just redownload the game from the Games page.

Happy Easter to all of you :)

Update of the GFABASIC section with a VBL handler for STE hardware scrolling and an inlined version of FPATCH2.PRG

added a utility for setting the Falcon volume

Update and cleanup of the GFABASIC section

Cooper's game "The Pairs are gone", made exclusively for the ST Offline Tournament, is now available on the Games page 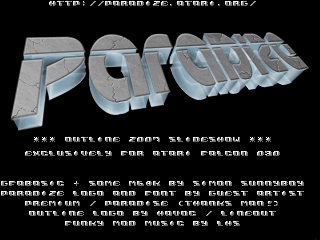 After a period of hibernation due to reallife activity Paradize is back on track!

Today we release a small update of the Desktop Configurator. The new version v3 has support for all versions of TOS builtin and automatically selects whether it has to overwrite DESKTOP.INF or NEWDESK.INF. Complete tool description is provided.

Grab it at the Tools page.

added photo gallery with pictures taken during the Outline 2007 party

The first complete ST demo by Paradize is available for download.

Get Orion's demo "Kick my ass'embler" from the Demos page

Marcer is a proud daddy now and all members of Paradize congratulate for Marcer Jr.

Get it at the intros page

By accident I put the wrong (non fixed) binary into the NWD downloads. It is now fixed. The really fixed version announces itself with a MEGA STE fixed message at loading.

Thanks to ggn for telling me and sorry for any inconvenience! - SSB

Nuclear Waste Dump has been fixed so it now runs on Mega STE properly and also the Medrez bug should have been fixed.

Grab the fixed version from the Games page

site overhaul with migration to static pages has started

added a bugfixed and TOS 2.0x compatible version of Znax

Phew - finally it is out.

Today we release the game Nuclear Waste Dump which has been delayed for over a year. But it was worth the effort and we are proud to show you the nice artwork by Minz and the cool soundtrack by Marcer.

As all games by Paradize this game is powered by GFABASIC. Go to our Games page to download!

An emulator friendly diskimage will be provided soon!

added some bootsectors and a page for size limited demos

Yes, the old website is back! Why you may ask?

The "new" site was severely bugged and after a discussing it was clear that we don't need that much interactive features.
I hope you aren't sad but as we seldom update the page this benefits most of us.

Now you can also find the latest release by Cooper here.
Znax is a cool and additive little puzzle game.

Beside this I did a generic content overhaul, adding some member photos and new links.

added emulator detector code for GFABASIC use to the library

added Paradize releases and contributions for Outline 2006 to the site

Update on the Paracon 7 picture gallery - now a few pics from Thothy are up and used with permission - check the Paracon 7 gallery.

The Paradize Antivirus has been released.

A small utility to install a simple virus detector bootblock on your floppy disks.

Paradize got back from the cool Paracon 7 party organized by Paranoia.

Photos taken during the party by Simon Sunnyboy can be viewed on the Paracon 7 gallery.

The Desktop Configurator has been released.

A small utility which allows you to select one of up to 10 individual DESKTOP.INF (or NEWDESK.INF) files from the AUTO folder.

Paradize now has its own forum where you can meet and talk about anything Atari ST and Paradize related.

Due to massive abuse, the guestbook was closed. If you want to leave us a comment, drop a mail!

Our new game Pooz has finally been released. Check http://pooz.atari.org/ for details.

added an example source in GFABASIC for loading and displaying .PI9 pictures on the Falcon 030 - download it from our GFABASIC section

added The Cookie Jar Inspector to the Tools section

back to the top